GEEKING OUT ON OUR SHOU SUGI BAN LARCH

GEEKING OUT ON OUR SHOU SUGI BAN LARCH

Jonathan, our founder and self-proclaimed wood nerd, gives insight on why we like Larch for our Shou Sugi Ban line:

The question of why we chose to work with larch for our Shou Sugi Ban (years ago, and more recently, for our pre-finished Larch exterior wood siding), has a few layers to it.

Generally, about western larch (larix occidentalis): With a Janka rating of 830, it is one of the hardest American coniferous softwoods. Similar in hardness to cherry, elm, or walnut. Considered moderately rot-resistant before treated, the tight grain, slow growth, and almost no sapwood characteristics of our select grade make it more rot-resistant than most of the second or third growth woods more typical to exterior use. For many, larch’s stunning grain and tone is just a bonus.

Importantly, the story of our Select Larch includes my 30-year history with a family-owned sawmill in eastern British Columbia; the patriarch of which is a master of the western woods. He had been pushing me for years to do something special with the amazing standing dead larch “buckskins” that he was seeing poorly utilized due to a lack of market for such large logs and lesser-known species. Our Standard Larch is also harvested from BC as a bi-product of logging. These commodity timbers are smaller, fast-growing, and make for another sustainable option.

With exterior and Shou Sugi Ban applications, we often hear about cedar and cypress. I had been looking for a western species to replace western red cedar for our charred wood line. I was very unhappy with the cedar’s friability in the deeper burns, and that fact that the many knots took a burn so differently than the field. As well, I’m convinced that the bulk of the harvest for western red cedar is not sustainably done. (Note that the higher, less knotty grades of western red burns well, but adds significantly to the cost and the forest depletion.)

The larch, however, takes and holds a burn amazingly well, and the fewer knots on the Select grade larger old-growth logs adds to the evenness and stability.

About cypress: Cypress can be a confusing name for more than one species. The cypress that is coming from the folks in the east is bald cypress, (taxodium distichum), and grows in the swampier areas of the deep southeastern US. Really, it’s not a bad wood to work with, though difficult to secure in higher grades. Years ago I was part of a team that was looking to re-build the Cabildo, a historic structure in New Orleans that had burned. We found that the cypress available was mostly not of the same quality as the original building, and the true old-growth cypress needed protection against over-harvesting. Generally, the board stock from this species contains more sapwood than I am comfortable with for exterior application.

Hinoki, or Japanese Cypress, (Chamaecyparis obtusa) is a very different species and grown pretty exclusively in Japan. It is the original species used for charring wood. Times change…right now Hinoki is on the IUCN Red List for Endangered Species (https://www.iucnredlist.org/), which certainly gives me pause. The Japanese government is really pushing its use, and I would hope is working hard to make it less endangered with better forest management. Also I am intimately familiar with the Hinoki now being used in Japanese-imported charred wood, and am completely unimpressed with the raw material I’ve seen and held. Too young, trees too small, much of it with some level of cupping. Its Janka (hardness) rating is a very disturbing 510.

So my opinion is that I am less interested in what was the original species than what is the best and most sustainable species. One can only assume that if the Japanese were to have access to the quality of the larch we have, they would happily use it. 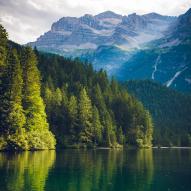 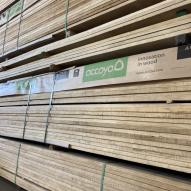 Accoya® the Outdoor Over Achiever 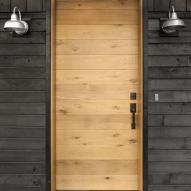